A Good Read: Balloons Over Broadway 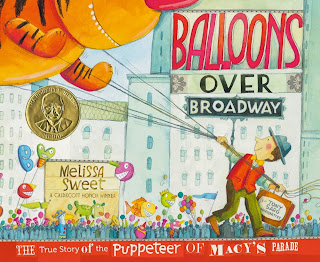 Thanksgiving morning always finds me sitting on the couch with family, having pumpkin muffins for breakfast and watching the Macy's Thanksgiving Day Parade on TV. We love the bands and the floats and we can't wait to see Santa arrive on his sleigh at the end. And, of course, we are always in awe of the huge floating balloons!

Balloons Over Broadway: the true story of the puppeteer of Macy's Parade is by Melissa Sweet, a children's author from Maine. It tells the story of Tony Sarg, the man who invented the first balloon animals for the Macy's parade. Tony loved to build contraptions and make machines. When he was six, he figured out a way to feed his chickens in their coop by pulling a rope in his bedroom!  The book tells about the challenges Tony faced as he tried to make the parade balloons bigger and better every year. When he had a problem, he tried creative ways to figure them out! Tony was a great problem-solver!

I love Melissa Sweet's illustrations. First, she paints backgrounds, then the main part of the picture. After that, she adds fancy letters or cuttings from books and magazines. There's so much to look at on each page!

If you enjoy the Macy's Thanksgiving Day Parade as much as I do, and you're looking for a fascinating Thanksgiving book, Balloons Over Broadway may be the book for you! It's available here, in the Children's Room at the Gordon-Nash Library!
Posted by Christine Hunewell at 6:42 PM