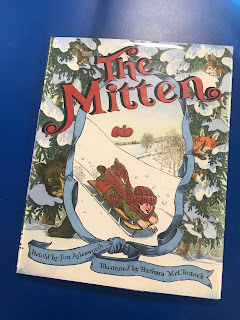 This week at the library, we read The Mitten, the classic wintertime story based on a Ukrainian folktale about a child who loses a mitten in the snow and the animals that try to squeeze into it for warmth. There are many versions of this tale - at Thursday Storytime, we read this one by Jim Aylesworth. 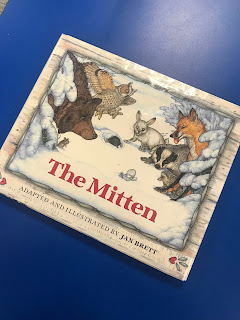 We also scanned the pictures in the Jan Brett version of The Mitten and talked briefly about what was the same and what was different in the two versions of the same story. 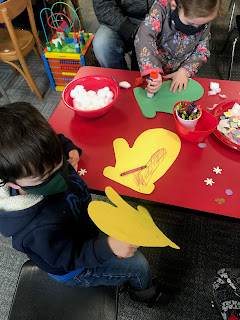 Then the children decorated a paper mitten using foam shapes, colored paper dots, crayons, and cotton balls. They left with some cut-out animals to put into their mitten to retell and reenact the story of The Mitten at home. 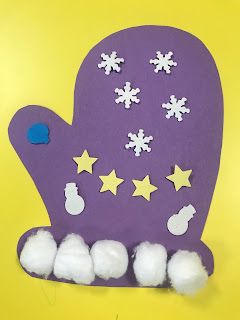 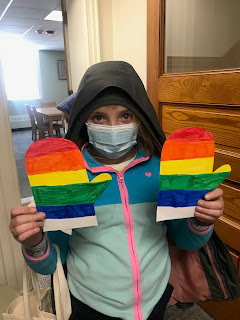 Later in the day, students came for Storytime from the local Saplings Nature School. We read the same two versions of The Mitten and compared and contrasted in more depth. After we briefly discussed the concept of symmetry, students fashioned their own matching pair of card stock mittens.
As students worked, we found and watched a third version of The Mitten, this one published in book form in the 1960s. We wondered how many other versions there were of this old folktale! 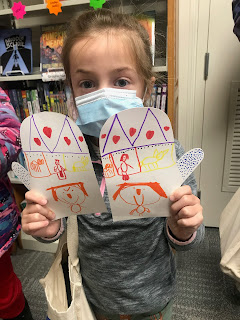 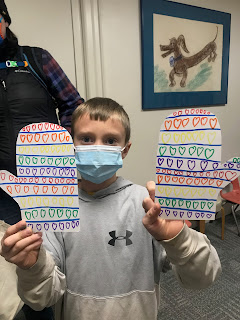 We decided to write our own unique version of the story! Here's how it begins:
There was once a child who went on a wintertime adventure to a frozen pond. He wore his bright, colorful mittens so he could find them if he took them off. And took them off, he did - to tie his skates! He forgot his mitten as he was skating away.
We also brainstormed a list of animals and chose some action verbs to go with some of them. I can't wait to continue our folktale next week! Check back here for the rest of the story! 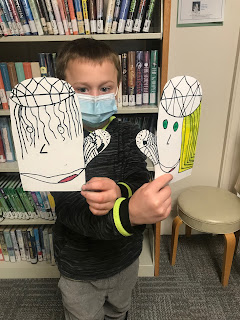 Posted by Christine Hunewell at 8:59 PM No comments: 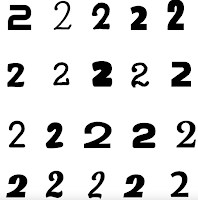 At our last Storytime of 2021, we read award winning books from the past year, like There Are No Bears in This Bakery, which won the NH Ladybug Award, and We Are Water Protectors, which won the American Library Associations Caldecott Award. We made headband hats to wear for New Year's Eve, with sparkly stars and the numbers for the new year - 2022 - chosen from lots and lots of different styles of 2 made with different fonts.
Happy New Year! 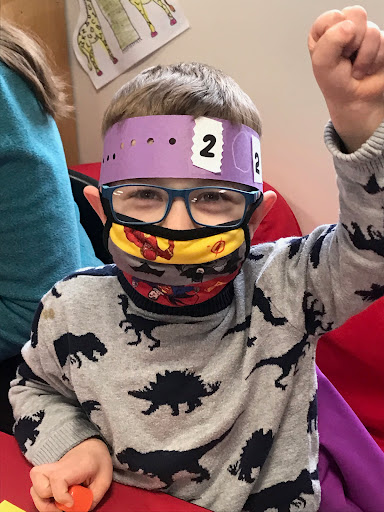 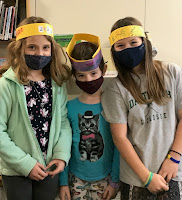 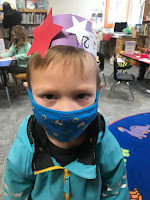 Posted by Christine Hunewell at 4:48 PM No comments: