Each June the Friends of the Gordon-Nash Library sponsor the Why Read/Why Write essay contest at the New Hampton Community School. Gretchen Draper, New Hampton resident, Gordon-Nash Friend, and teacher-consultant for the National Writing Project in NH, organizes the contest which is open to all fourth and fifth graders at the New Hampton Community School. The theme of the library's Summer Reading Program is the basis for the writing and drawing that the students do, and, after judging, their finished work is displayed at the library during the summer months.

This year, students wrote about why "Libraries Rock!" Books, CDs and DVDs, programs, after school program connections, and helpful staff were some of the things students wrote about in their essays. Writers also created posters to accompany their essays. Judging was very difficult this year - there were many wonderful ideas and well-worded essays. 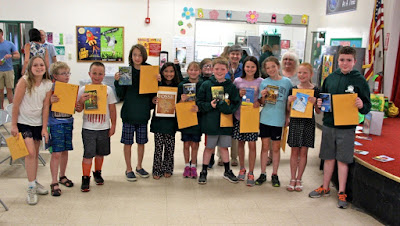 An assembly was held at the school, where all writers received a Certificate of Participation and a Why Read Why Write bookmark. First place winners in each grade level were awarded their choice of book purchased by the Friends. Students' essays and posters will be on display upstairs at the Gordon-Nash during the Summer months. Stop in to see them! 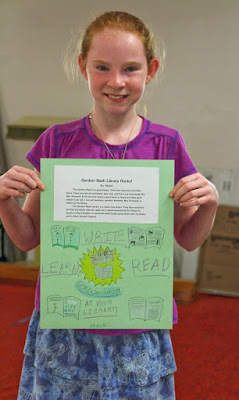 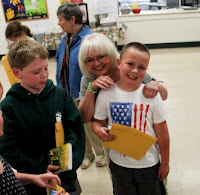 Posted by Christine Hunewell at 10:48 PM