The Crazy 8s Math Club this week worked with coins to determine values and to have fun! We decided that coins are handy in case something doesn't cost a whole dollar. Also coins like quarters are good because it's easier to carry that coin than twenty-five pennies!

We won rulers and pencils by quickly combining coins of the correct value.

We also played a game like Son of Rock, Paper, Scissors, where one coin could beat out another of a higher value - except for a penny, which could beat a quarter. We secretly chose a coin, then said, "Penny, Nickel, Dime, Quarter" and then showed our partner our coin. The player whose coin had the highest value won that hand. 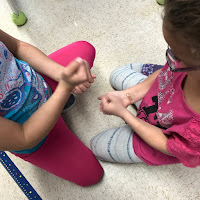 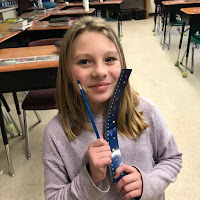 Posted by Christine Hunewell at 2:46 PM