Have you ever watched the Macy's Thanksgiving Day Parade? It happens in New York City every year, it's full of floats, marching bands, and giant balloons, and it's always on television Thanksgiving morning. At this month's STEM Storytime, we read Balloons Over Broadway: The True Story of the Puppeteer of Macy's Parade by Melissa Sweet, and learned all about Tony Sarg, the person who invented and engineered the parade's giant balloons. We learned his balloons were inspired by his puppet collection! So we engineered a rod puppet a bit like the one that Tony had. 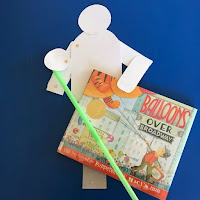 We fastened together shapes using tape for immobile parts and brads for the arm part that moved. We gave our puppet a face, hair, and clothes from crayon or paper. We attached a milkshake straw rod to the puppet's hand so it could move its arm and a cardboard handle so we could hold it. 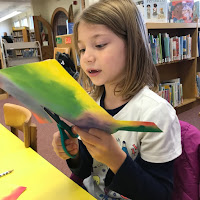 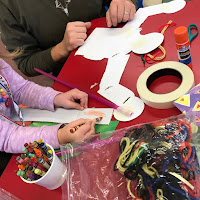 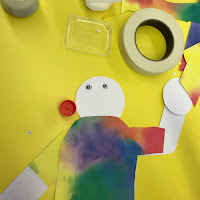 Each puppet looked different - but they all could wave! We took our puppets home to embellish them more and to make our own puppet shows! 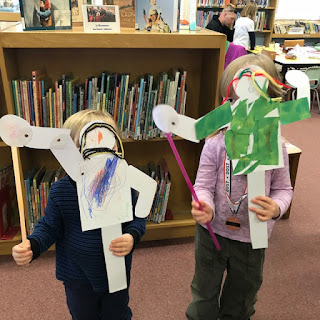 Posted by Christine Hunewell at 10:37 AM