NHCS StoryCrafters heard the story of Bear's First Christmas, the rhyming tale of a bear who helps out some animal friends and experiences the joy of Christmas...


Out of doors, the beasts stared as the last embers fell,
They thought and they thought, but they still couldn't tell
What the meaning could be of the music, the lights,
And the gladness inside on this darkest of nights,
But sparks deep inside them gave off that same glow
As they made their way back through the drifts of deep snow. 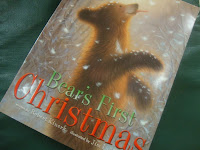 After the story, we made another kind of bear - an ornament for our trees at home! Children made a bear's face and ears from paper and glued on a cotton snout and googly eyes. A white cup served as the bear's body. Inside the cup, we suspended a tiny bell on a ribbon, so the ornament jingles when it moves! A polar bear for Christmas! 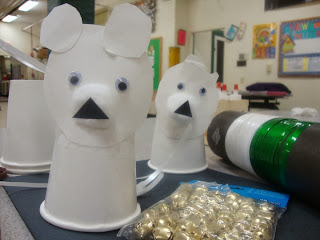 Posted by Christine Hunewell at 9:53 PM