Bats (At The Library!) 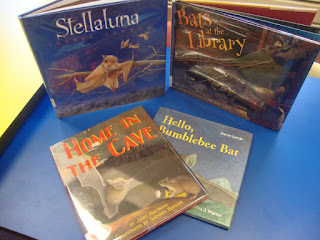 Storytime this week was all about bats! We read four bat books and made a bat to take home. We began with  Bats at the Library by Brian Lies, about a colony of bats that visit a library like ours one night when a window is left ajar. Can you imagine what they did there? We also read Stellaluna by Janell Cannon about a baby bat who finds himself living with and imitating a bird family. Hello Bumblebee Bat by Darrin Lunde, on loan from another library, told true facts about a bat so tiny that his wingspan is only six inches! Finally, Home in the Cave by Janet Halffman was realistic fiction that told how bats who live in caves help support the ecosystem there. 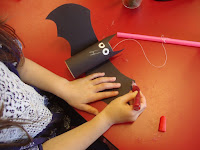 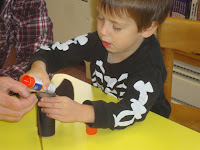 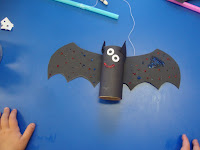 The bats we made had cylindrical bodies with wings decorated with white crayon and brilliant glitter glue. They had pointy ears and eyes made of reinforcements. They dangled from a drinking straw that could be held up and swung around to make the bat fly! Weeeee! Fun! 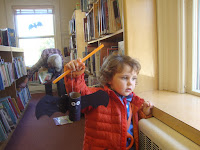 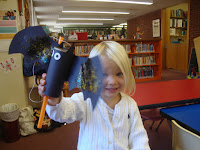 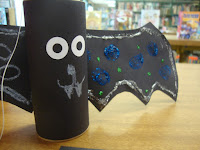 Posted by Christine Hunewell at 7:53 PM